Adventure According to Humphrey 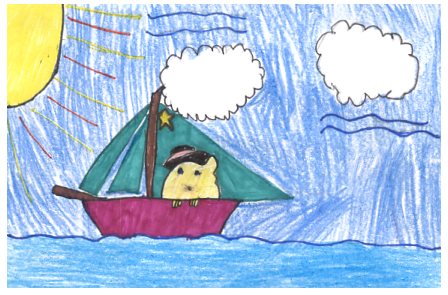 In Adventure According to Humphrey, Humphrey is a nice, kind hamster who loves going on adventures. Humphrey’s class is going to Potter’s Pond to have a boat race. Humphrey is disappointed because he doesn’t get to go. The class worked in groups of two to make a boat that they will race. Whoever wins will get a ribbon. Richie is jealous because Kirk is doing all the work on the boat. So Richie plans on bringing a remote control submarine to the boat race and glide next to Kirk’s boat and show him he knows something about boats too. Gail and Heidi aren’t agreeing on whether to do a plain boat or a colorful boat. Humphrey doesn’t like the way things are progressing with partners and he wants to do something. One night Humphrey takes a stroll around the classroom and accidentally dozes off in Kirk and Richie’s boat. They put the boat in the water and Humphrey sailed off. Did Richie’s submarine hit the boat? Did Humphrey fall into the water? Well, you just have to read the book to find out.

I liked the author because she is creative. I think the author is creative because after every chapter in the book she puts a quote from Jolly Roger’s Guide to Life. Not a lot of author’s do that. An example is after chapter 1 it said “If ye be seeking adventure, mateys, the only place to look be the high seas! From Jolly Roger’s Guide to Life by I.C Waters.” I learned that even though someone is mean to you doesn’t mean you have to be mean back. When Kirk was being mean to Richie and doing all the work on the boat didn’t mean Richie had to bring the submarine to the contest. My favorite part was when Humphrey was in the boat and pretended to sail. That was my favorite part because I didn’t know what was going to happen next.