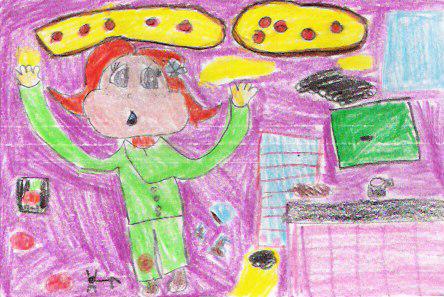 This story is about when Katie went to Lounie’s Pizza to see him make the pizzas. Katie’s friend Suzanne was trying to set a record. Katie wished that she could be anyone but herself. Maybe there was a shooting star above her. There was another pizza place. Suzanne had a paddle that was from the Olives and Oregano. Then Lounie got mad because it was from Olives and Oregano. They were running Lounie out of business. Olives and Oregano, Katie, her friends, and Lounie were planning to have a contest. The contest was beginning but Lounie told Katie to go get supplies. Then the magic wind came and it turned Katie into Lounie. Then Lounie had already made some pizza pies. Some people where dropping out of the contest. Then Lounie made some pizza but it was dessert. It was such a big hit that it turned Katie back into herself. Lounie also added the pizza desert onto his menu. Now he doesn’t have t move because more people came to his restaurant.

My favorite part was when Katie, as Lounie, made the dessert pizza because I wanted to taste it. The story reminds me of my life because my step-dad worked in a pizza place like Lounie. Katie changed because of the magic wind. She also changed into Lounie. This book is not like anything I have read about because it is sad.