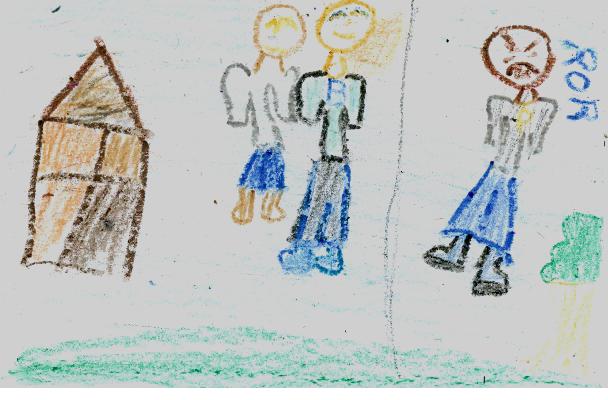 Arthur tells his parents that he doesn't want to go to camp.

His mom says it will be fun. Arthur's parents drop him off at the school bus. Arthur saw people by the bushes and by the trees. The people were from Camp Horsewater.

The girls were having fun. Muffy brought chocolate chip cookies and muffins for her friends. The lights went down in the tent.

The boys were tired and frightened. They had to run and do pushups all day. Suddenly, frogs were jumping all around the tent. The Brain liked the frogs, but Arthur and Buster were scared.

During the next day's tournaments, the girls were winning everything that they played. The boys felt sad and embarassed.

Arthur wanted to go home because he missed his mom and dad.

Arthur's friends thought that the girls took their clothes. Muffy thought that the boys threw a smoke bomb into their tent. But when they heard footsteps in the woods, they figured it was someone else.

They put up a fire and they didn't want to tell scary stories. Instead, the Brain said, "We have to do something." The Brain suggested that they stand and watch out for the scary things.

They found out that Camp Horsewater was scaring them all along. Buster and the Brain had a plan to fix the problem. Meanwhile, Arthur ran away. He was sneaking away while the wolves were howling.

The next day, Becky, the nice counselor, read the list of things to find. The Brain and Francine were talking about their plan to get back on Camp Horsewater, while Arthur was sneaking away.

The Meadowcroak team started to worry about Arthur and Buster asked where Arthur was. But Francine said, "It doesn't matter if the Horsewater team never comes down from the trees. We can't win if we don't have everything."

Arthur got lost. He turned on his flashlight because he heard strange noises and it was dark. When he turned it on, his team was proud of him because he found a flashlight. Arthur felt happy.