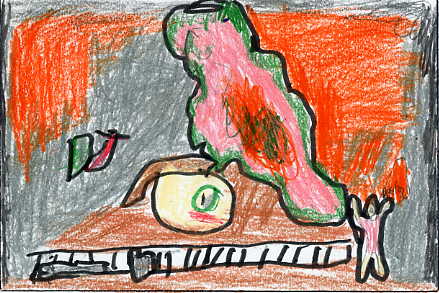 This book, number four in a series, is about a boy named Bobby Pendragon. He's a Traveler on a quest to defeat Saint Dane, who wants to rule all territories, which are like worlds. This book focuses on Bobby's fourth stop on his journey, Veelox. This territory is under attack from Saint Dane, but it's quite peaceful - because it's deserted. Everyone is on this weird virtual reality game called Lifelight, which takes fantasy and makes it real (i.e., you think of a pizza, BAM! There's your pizza, right in front of you). The only condition is that the fantasy is what the person thinks about - good or bad, but mostly good (i.e., if you want Lifelight to show you a dog but you're thinking about a bread roll, you get a bread roll and not a dog, unless you're also thinking about the dog, in which case Lifelight will bring both out. Confusing, eh?) However, with the rest of Veelox utterly deserted, the territory is crumbling. A girl from Veelox, who is the resident Traveler and a Senior Phader on Lifelight, Aja Killian, creates a virus called the Reality Bug to take the bad with the good, scaring people out of their jumps (trips to Lifelight) so that Veelox will come back to life again. However, Saint Dane makes the danger real, so the plan backfires. All the while, Mark Dimond and Courtney Chetwynde, Bobby's companions, become acolytes (People that help Travelers) and Mark joins a science organization called the Sci-Clops. Who will survive the Reality Bug? Can the bug be stopped? What else is going on? Read the book to find out the answers to all these questions.

This book rocks! I'm pretty sure you'll agree with me once you've read it. Courtney changes a lot because she loses confidence. Note that this change isn't a good one. Mr. McHale's style keeps his readers on the edge of their seats, which makes the story the cool book that it is. There aren't any illustrations - the book's all text. The plot makes up for this, though.

You can probably tell I'm going to recommend this book because of its gripping story and amazing characters. I think fans of Sci-Fi and action books will like this, but they'll have to be 10 years old and up. Someone dies (No, I will not tell you who) and there are a few bad words.

James A.
is a student in
Ms. Lonkhurt's and Ms. Hansen's 3rd-4th Grade Classes