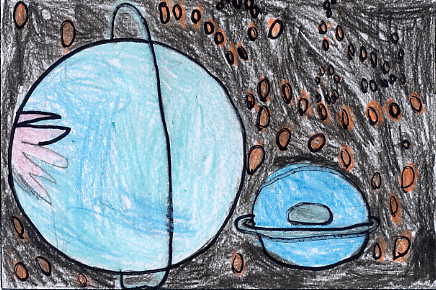 This book is about Uranus, Neptune, and Pluto. The book explains why these planets have the names they do. They are named after three Greek gods. The book has a picture of Uranus' rings and what they are made of. This book also tells about the planets' moons. Some moons are named and some are not. For example, one of Neptunes moons, Triton, actually has a 688 year cycle of seasons!

I liked the book because it tells about our solar system, space, planets, and science. I liked it because the book has a lot of very interesting pictures. There is also a great picture of our galaxy. It is pretty easy to read. I like books about space and science.

I recommend this book for fifth grade and up because there are some hard words. I'm in third grade but still enjoyed reading it anyway.