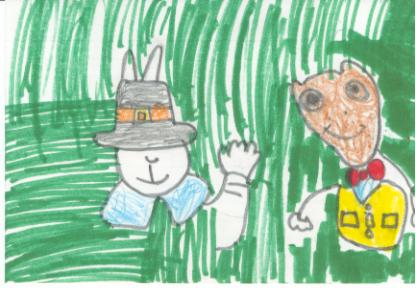 Arthur hoped he would be the director and Mr. Ratburn picked him. Then his friends wanted to choose their own costumes so Arthur got a lot of stuff from his friends. Arthur was choosing the characters and no one wanted to be the turkey. At rehearsal, his friend Buster read his things wrong and Francine wouldn't take off her glasses. Arthur got a real turkey for the play and it was a wreck. The lights turned off and Buster read his things right. His family and friends were turkeys and they said Happy Thanksgiving.

My favorite part was when they celebrated Thanksgiving and when Arthur was a turkey. My favorite characters were the real turkeys at the end because they were funny. The colors in the pictures were blue, white, green and yellow. My favorite color is blue.

I recommend this book to first graders. I like to read and I think my friends will like this book because they will like the colors and the turkeys.