Ghost Twins and the Mystery of One Wish Pond

Ghost Twins and the Mystery of One Wish Pond 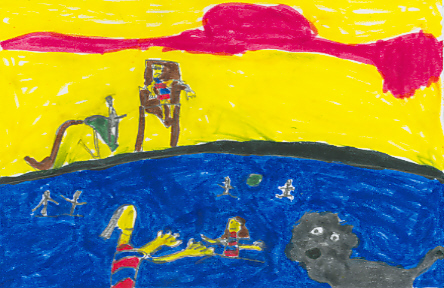 Robert and Rebeka are twins, and they have a dog named Thatch. Fifty years ago they became ghosts. Now their house is a vacation rental. Two cousins, Jeff and T. J., and their Aunt Jenny rent Zuffel House and get scared in their sleep because Robbie and Beka haunt them. Jeff and T. J. go on a camping trip to Mystery Island where the so-called One Wish Pond is supposed to be. Jeff, T. J., Aunt Jenny, and even Robbie and Beka get awful scared. As a result, they lose Thatch, T. J. twists his ankle, and Aunt Jenny nearly gets frostbite in the river. It is an exciting story sure to make you want to read on.

I think this is a really funny book because Beka does a whole bunch of funny things to get Jeff, T. J., and Aunt Jenny out of their house. One time, Beka made some Monopoly game pieces fly around to scare them. That was really funny. My favorite character is Robbie, because he was a Boyscout, and he laughs at some of the things Jeff and T. J. do to survive on their camping trip. I am a Boyscout, so I know what it's like to use survival skills when camping. My favorite part is when they find One Wish Pond, because they think they found it all by themselves, when all the time they were led to the pond by ghosts.

I would recommend this book to third and fourth grade students, because it is an easy chapter book. I think anyone who loves ghost stories and mysteries would love this book.

Carson B.
is a student in
Mrs. Calkin's 3rd Grade Class