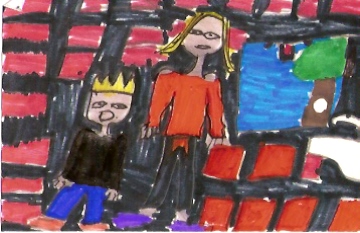 This book is about a boy named Stink, who is really short. A lot of funny things happen to him. He has an annoying sister who does crazy stuff to him. One time she even put orange hair gel in his hair and gave him a Mohawk. Stink has a bunch of other crazy adventures in this book. I think that this is a great book. My favorite part was when Stink's sister put orange hair spray in his hair. It was really funny. My favorite character was Stink. I liked him because he was the main character and I like his name. I laughed a lot when I read this book. It made me want to read other books like this one. I think that Stink is a great book, and I think younger kids, like my brother who is four years old, would like their parents to read this book to them. I think older kids, both boys and girls, would like the book, too, because it's so funny. They would like the funny adventures that Stink has.