The Cricket in Times Square

The Cricket in Times Square

Reviewed by Will Mc (age 8) 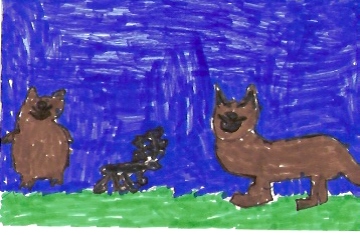 This story is about a cricket from Connecticut who ends up in Time Square. He meets two animals named Tucker and Harry. He also meets a boy named Mario. He learned that he can play music and he becomes famous. However, he is not happy. What will he do? I liked this story because the animals could talk and because they had a party. That party was one of my favorite parts. I also liked this story because the cricket became famous. The illustrations in the book were good because they were very realistic. My recommendation is that seven-year-olds and up could read this book because six-year-olds may not be able to understand all the words. Adults could also read this book to their children. I think the interesting part for all readers would be the party because of all the excitement. At the party they had a radio for listening to music plus food and drinks, and those things make it exciting.

Will Mc
is a student in
Mrs. G.'s 2nd Grade Class