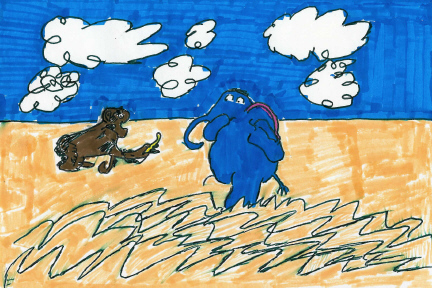 In the book, Hiccups for Elephant, all the animals in the jungle were fast asleep, but not Elephant. He had the hiccups. All the other animals tried to cure Elephant's hiccups.

The hiccups woke Chimp up. Chimp said that he could cure Elephant's hiccups by having him eat a banana standing upside down, but Elephant fell down. He did not want to try it again because it did not cure the hiccups.

Later Elephant hiccupped again and woke mouse. Mouse tried to cure the hiccups by saying, "boo" in his ear and that cured the hiccups. Then the animals fell fast asleep in the jungle.

My favorite part was when Elephant hiccupped and it woke Mouse up. That was funny. Then something else happened. Elephant sneezed.

I liked Elephant because he kept on hiccupping. I also liked Mouse because he made a really funny face. Then he tried to cure the hiccups, but it did not work.