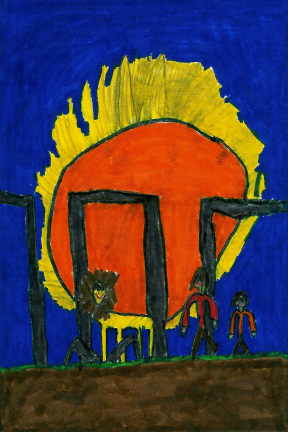 This book is in the series The Chronicles of Narnia. The Lion, the Witch, and the Wardrobe is a book about four kids, a lion called Aslan, a witch called the White Witch, and a wardrobe. The kids' names are Peter, Susan, Edmund, and Lucy. They are brothers and sisters. The kids lived in London, England and then there was a war. They (without their mother or father) went on a train to the country. They were staying at a mansion with a professor whose name they do not mention.

One day, Lucy finds a wardrobe that leads to another world called Narnia. A wardrobe is a type of closet. Lucy took the others to Narnia too. In Narnia, one problem is that Edmund had been to Narnia at the same time as Lucy and had met the White Witch, who was an evil witch. He was on her side.

There was another problem in Narnia. The White Witch made it so that in Narnia, it was always winter and never Christmas. Aslan, the lion, was the maker of Narnia. He had come to Narnia to stop the White Witch. Aslan wanted to stop the everlasting winter. The White Witch didn't like this. If you want to find out what happens next, read the book.

My favorite part in the book was when Aslan breathed on the statues and they became creatures again. I liked this part because it made me feel happy and excited at the same time.

I also liked when Lucy saw Mr. Tumnus again. It made me feel happy. I liked when all of the creatures who were saved by Aslan go and help Peter and Edmund in the battle, which was called the Battle of Beruna.

My favorite character was Peter because he was really cool and valiant. He was a great person and a great high king.

This book is a lot like Prince Caspian which is in the same series and written by the same author. The reason it is like this book is because it has the same main characters. Also, there's another battle and it has Aslan in it. Once again Aslan is a really important character.

I recommend this book to people seven years old and up. The reason I recommend it to them is because it is really cool and even grown ups will like it. It is an exciting book with endless adventures.