Ricky Ricotta's Mighty Robot vs. The Stupid Stinkbugs From Saturn

Ricky Ricotta's Mighty Robot vs. The Stupid Stinkbugs From Saturn 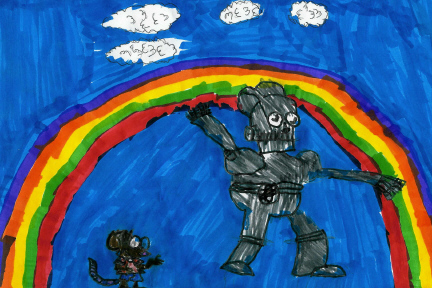 This story is about Ricky Ricotta's battle with the stupid stinkbugs from Saturn. Ricky Ricotta is a regular mouse who tries to save the day. The stinkbugs are trying to take over the Earth. They also try to take a mouse called Lucy because they thought that she was a real princess. Lucy thinks she is a princess too.

I like this book because it has Flip-O-Rama. Flip-O-Rama is a type of illustration. It's when you have a piece of paper with a picture on it. On the next page, there is basically the same page, except the characters have moved. If you flip the pages, you will see the picture move.