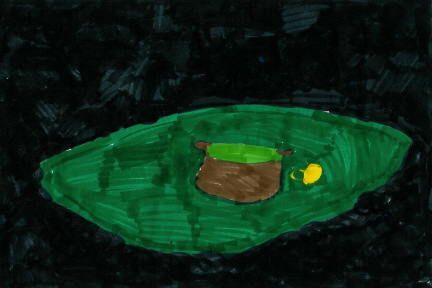 In the book, Harry Potter and the Half-Blood Prince, Harry is in his sixth year at Hogwarts, a school for witches and wizards and he is learning to apparate. He is having meetings with Dumbledore. Dumbledore is old, but he is still working at Hogwarts as the headmaster.

In his meetings, Harry finds out much more about Voldemort. Voldemort, the dark wizard, mysteriously disappeared after he tried to destroy Harry, but he returned in Harry's fifth year. He has been gaining some of the powers he accidently gave to Harry when he killed Harry's parents.

Harry ends up going on a mission with Dumbledore. But when they get back, dangerous things are happening within Hogwarts. Harry isn't surprised that Snape is involved. Snape has stopped teaching Potions at Hogwarts and is now teaching Defense Against the Dark Arts.

A few people at Hogwarts suffer injuries, some more than others. The injuries are sometimes serious, like being scratched by a certain animal named Fenrir Greyback.

The characters that I liked were Harry, Hermione, and Ron. Hermione and Ron are Harry's closest friends. I liked Hermione because she is very aware of getting in trouble and always says to Harry and Ron, "I don't think you should do that." But they always do and sometimes get in trouble anyway.

I also liked Ron because he is very supportive of Harry. Ron is not the smartest kid, but he is still Harry's best friend.

When I read Harry Potter and the Half-Blood Prince, it made me feel very different in every part. When somebody died, I felt sad. When it was scary, it made me nervous. When Harry was finding out more and more, it made me wonder what the solution would be.

Angela B.
is a student in
Mrs. Giammusso's 2nd/3rd Grade Class