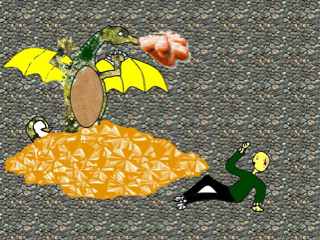 The Hobbit is about a hobbit (a hobbit is a mythical creature that is about three and a half feet tall and they don't wear shoes) named Bilbo Baggins. He was having a normal day when twelve dwarves came to the door at different times. Then Gandalf the wizard (a friend of Bilbo's dad) came and told Bilbo about a dragon named Smaug, and how he stole the money from the ancestors of the dwarves. He asks Bilbo if he would like to go on an adventure through a land full of giants, giant spiders, huge birds, transforming beasts, and other cool creatures, to steal the riches back from Smaug.

I found Gandalf the wizard very interesting, because he can make magic smoke rings. Bilbo changed over the book because at the beginning, he didn't want adventure, but at the end, he wanted more adventure. This book is part of a series called the Lord of the Rings. This book is like the other books in the series because it has the same creatures as the other books.

I would recommend this book to kids who like the Harry Potter series, because it has the same setting and creatures. I thought this book was a very good book, because it made great pictures in my head.

Matt A
is a student in
Mrs. Appell's 4th and 5th Grade Class