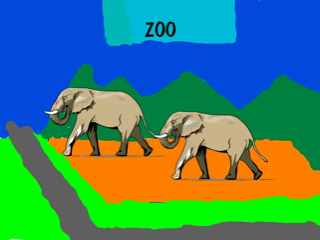 Faithful Elephants is a touching story about three elephants in a zoo who are living in the middle of a war. The zoo has to ship the small animals away to other countries and kill the large animals so that they won't break free. This is a true story about the three elephants in the Japanese zoo. The first elephant was shot and the other two were starved. They tried to do tricks so they would get food; they tried everything but could not survive. The elephants sadly died. The zoo keepers were heartbroken.

This story made me sad as well as angry that war could hurt so many that were innocent. This book also made me feel touched and uplifted at the same time because the zoo manager hated to kill the elephants. I was happy to know someone cared for them. I was so sad that innocent animals were affected by war just as humans are.

You might want to read this book if you love animals or see no harm in war. I promise you will remember this book for the rest of your life.

I recommend this book because it makes your heart skip a beat and keeps you thinking about the lesson to be learned; war cannot bring peace, only hatred and sadness.

Caroline J
is a student in
Mrs. Appell's 4th and 5th Grade Class