The Kid Who Ran For President

The Kid Who Ran For President 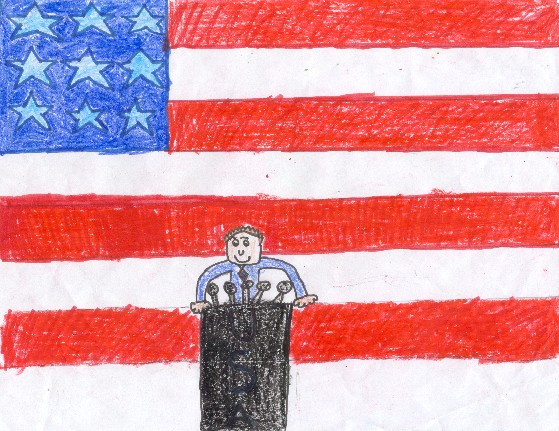 This glorious book, The Kid Who Ran For President, is about a 12-yr.old boy named Judson Moon who is running for the president of the United States. His best bud, Lane Bernard, is going to try to run Moon?s campaign. Then America finds out that he threw away his worst enemy?s (Arthur Krantz) paper. Now America is against him so he is going to go to debate to prove to America that he is very sorry. Finally the votes are in so it all comes down to the states. You?ll have to read the rest and find out if Lane and Moon can pull this thing off and win the election!

My favorite part in this book is when Moon and Krantz get into fights. I think this book is fantastic because it made me feel like it is possible for any young person to accomplish their goals. I liked it a lot, because it was really odd for a kid just a year older than me to run for president. This book is very unique because it is very well written. Man - you?ve got to read this book.

I would recommend because it is so fascinating. I think everyone would be surprised to see a 12 year-old running for President of the United States. I would suggest this book to people 10 and over. This book would interest this age of readers because a 12-yr.old boy is running for president.