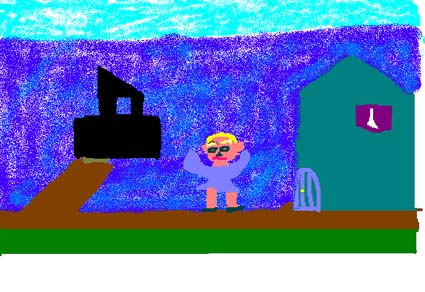 Number the Stars is about a young girl named Annemarie whose best friend, Ellen, is a Jew during Hitler?s takeover in Denmark. Hitler's intention is to get rid of all the Jews. Now, Annemarie and her family must concentrate on smuggling Ellen?s family to Sweden. Annemarie?s Uncle Henrik agreed to take Ellen and her family along with other Jews on his boat. However, will they really achieve their goal and make it to Sweden? What will happen to Annemarie?s and Ellen?s friendship? Will Hitler just leave the Jews and Denmark alone? Find out by reading Number the Stars!

In my opinion, I think the characters seemed very lifelike. They seemed lifelike because some of the main ideas of the conflicts in this book occurred in real life. I think they reacted like people would have reacted when events such as that really happened. I portray myself to be like Annemarie because I would have made most of the same decisions that she made. In a different book I read, I learned about a real Jew named Anne Frank was related to Ellen. I respect all that the Jews went through. Saddam Hussein, former ruler of Iraq, relates to Hitler except that Hussein wanted to eliminate the Kurds. This book reminds me of my life because Annemarie had to overcome obstacles and I also had to when I had a very rare disease.

I recommend this book to anyone who loves adventurous and suspenseful stories such as myself. However, some children might be afraid of some of this suspense. The proper age limit should probably be nine and up. If you love stories about fighting or stories that keep you interested, Number the Stars is the perfect book.

MacKenzie B.
is a student in
The White Tigers