Cam Jansen and the Mystery of the Babe Ruth Baseball

Cam Jansen and the Mystery of the Babe Ruth Baseball 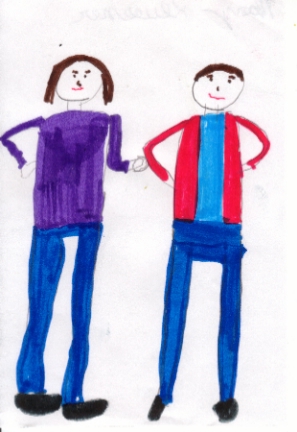 Cam and Eric are best friends. Cam has a photographic memory. It is like a camera. First she looks at something. Then she says, "Click." Then she can remember every thing she has seen. Cam and Eric were at an exhibit. It had a Babe Ruth baseball, posters, and baseball cards! They realized it was a collection of Babe Ruth!

Mr.Baker owned it. He gave Cam and Eric some baseball cards. Then they asked around if anyone would have some questions. Cam would answer them with her eyes closed. Cam got all of them right.

A little while after that, she opened her eyes. Mr. Baker was asking people if they saw who took his baseball with Babe Ruth's autograph on it. Cam look around and it was gone. Then she said "Click" a lot of times.

Many things came up in her head. Cam told Eric what she saw. They spotted a secret guard. They went over by him and told him what had happened. Then a boy saw them talking to him and began to run. They started to run after him. They chased him to a playground. They lost him there. Then Cam said "Click." She saw what he was wearing. It was a bright green jacket and blue jeans. Then they looked all around. They found him sitting on a bench. Cam, Eric, and the Secret Guard went over to him. They all saw that he had a lump in his pocket. It was a baseball but it was not the right one.

The Secret Guard went back to the exhibit. Cam and Eric went over to another bench. Cam saw a girl walking out of a door. She was caring a sports bag. Cam said to Eric "Look!" When the girl turned the corner. They went after her. She saw them and started to run. They ran after her. She ran and tipped over her bag. When Cam and Eric caught up to the girl. She was laying on the sidewalk. They look in her bag but the ball was not there. They said they were sorry and went away.

Cam and Eric went back to the park. The boy was still there and so were the children that were playing ball. Eric was watching the kids playing while Cam was saying "Click." Then the kids threw their ball too far and the boy got up and got it. Then he took his baseball out his pocket and threw it over to them. Then he left, Cam said he had figured out what happened. They followed him to an apartment building. If you want to find out what happened then, or if the boy is the thief, read the book.

I like this book because it is exciting. It has some mystery. My favorite part of the book is when Cam figured out who has the ball. The pictures in this book are black and white. This is one book in a series.

I recommend this book to people who like mystery and who like to try to figure out what happens next. This book keeps you wondering who did it.