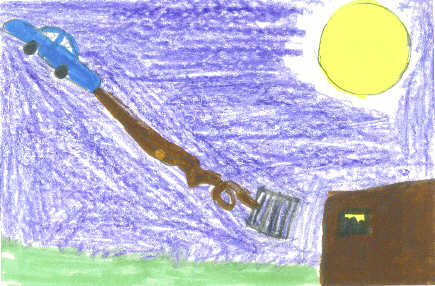 Did you ever dream of doing magic or flying in the air? This is a story of Harry Potter and the Chamber of Secrets. Harry's parents were killed by Lord Voldemort, but Harry survives! After this Harry lives at Privet Drive #4 with Aunt Petunia, Uncle Vernon and Dudley. He surely hates them for their mean treatment. Then later, Dobby, a house elf, warns Harry not to go to school. But he goes anyway. Harry, Ron, and Hermione meet a new professor who teaches Defense Against the Dark Arts. At Hogwarts, Harry hears voices that no one else hears. The students start to get petrified. Harry wants to find out about the history of Hogwarts, what is in the chamber of secrets, and who is the Heir of Slytherien.

My favorite character is Harry because he wasn't killed by Lord Voldemort, the Dark Lord. He is one of the best students at Hogwarts and earns points for his house. Sometimes I feel like him because I am a good student and I try to earn points for our table to be the table of the week. My favorite part is when Harry gets to the chamber of secrets. He meets Tom Riddle who has a diary of bad memories and Ginny, lying on the floor with a marble-white face.

There are five books in the Harry Potter series. The Chamber of Secrets is the second book. This one is more exciting than the first one because Harry has a greater threat to battle. He has more experience to deal with the dangers.

I recommend this book for ages 8 and up who are advanced readers and like magic spells and characters who try to achieve an extremely hard goal.

Shakib I.
is a student in
Ms. Welty's 3rd Grade Class