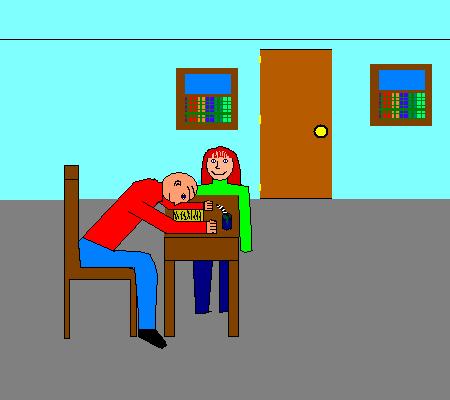 The book Teller of Tales is about an old man and a red headed girl without a name. Teller writes about news and what people say during public events. His father told him "write what you're told and you'll never be cold". So he did. He always was cold in his life though. He meets a red headed girl and they become "friends". They never sound like it, but they are. The emperor reads a news story written by Teller about himself. He doesn't like it and orders him to stop writing what he is told. He, instead, tells him to write stories. He tells the girl to help Teller write the stories with him. He begins to remake stories old like "Little Red Riding Hood" and "Goldilocks".

Teller of Tales was a good book. It had weird things in it, but other than that it was okay. I liked it because it is interesting to read stories like "Little Red Riding Hood" only changed enough to be a different story. There are also little twists outside of reading the stories Teller writes. My favorite part is when Teller finds out the girl is stealing his money to buy themselves food instead of asking. It was sort of funny, although I think he was too nice to her about it. A character I liked and thought was interesting is Teller. He says things politely, but will back himself up if someone doesn't extend him the same courtesy.

Brandon B.
is a student in
Mr. Perkins' 6th Grade Class