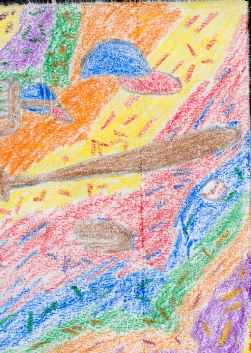 The 5 main characters in this book are Babe Ruth, Joe DiMaggio, Jackie Robinson, Roberto Clemente, and Henry Aaron. I would recommend this book because it teaches you a lot about five baseball players and how many straight games they made like Joe DiMaggio nicknamed Joltin? Joe because he was one of baseballs best all-around players after five years, made fifty six straight games. Jackie Robinson was the first black man on a major-league team in more than half a century.

I like this book because it has many interesting facts about baseball?s best players like I didn?t know that Roberto Clemente died in a plane crash on New Year?s Eve.