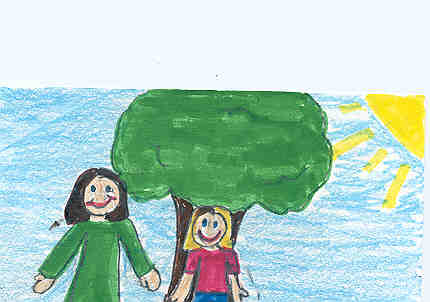 Geeder and Toeboy are visiting their grandfather's farm in Ceylon. While visiting, they meet a girl named Zeely, who farms land rented from their grandfather. Geeder thinks Zeely is one of the most beautiful girls she has ever met. One day Geeder finds a photograph in a magazine that resembled Zeely. It was a picture of a Watutsi queen, and Geeder thought Zeely looked exactly like the woman in the picture. She told everyone in her village that Zeely was a queen. Zeely goes to visit Geeder so she can set the story straight. To find out what happens, you need to read this book.

I enjoyed this book because it had many visual details. It was easy to visualize the scenery in the book, as well as how the characters looked and how they felt. I was reminded of myself when I read about Geeder because I also tend to jump to conclusions too quickly. My favorite part of this book was when Geeder told Zeely the true story.

I would recommend this book to others. Those who enjoy suspense and descriptive language would enjoy this book. It was easy reading, but fun. Once you pick this book up, you will never want to put it down.