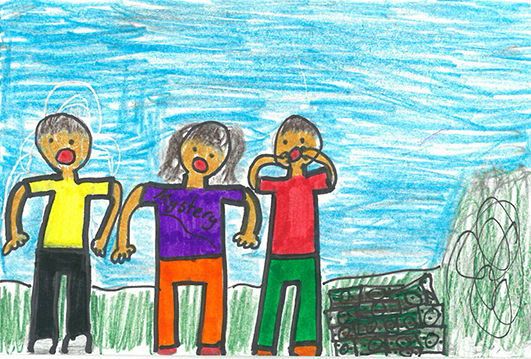 Have you ever wondered what it is like to be in charge of figuring out a huge problem? Well than you should read this book, The Invisible Island from the A to Z Mysteries. Dink, Josh and Ruth Rose go for a picnic on the huge Squaw Island but when they get there it is so foggy. While they search the foggy Squaw Island they find lots of money and poison ivy. They hang up flyers to see if anyone lost any money and also ask their neighbor if he planted any poison ivy. He says no. Next they report to the police then eventually the kids go back to Squaw Island to see if they can find anymore money but then they realize the poison ivy is fake.They also find a crumpled receipt that says their neighbors name and says he bought green pipe cleaners for the stem of the of the fake poison ivy. Finally, they show the police. If you want to find out what happens to the guy who made the fake poison ivy, well then you will just have to read the book to find that out.

I loved The Invisible Island by Ron Roy because the kids are so brave and adventurous and they never gave up when facing difficult times. I also liked how the illustrations really matched the words. For example, when it said they were searching the island there was a picture of them looking behind rocks. I also liked how this book has letters instead of book numbers for example, this book is book I instead of 9. I can make a great connection of how they search the island and found something cool and once when I went to the beach I found something cool as well.

I give this book a 7 out of 10 because they are so adventurous and did not give up when facing difficult times. I think if you are a kid that is adventurous and persistent then this is definitely the book for you!