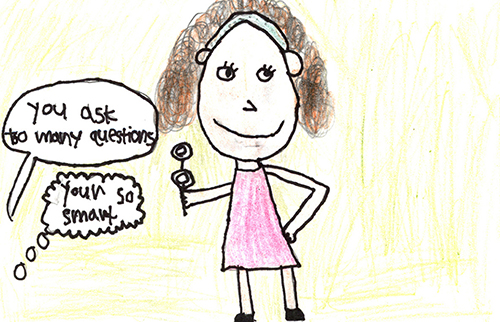 Have you ever said something that you didn't mean? This book is about a girl whose feelings were hurt because a boy called her "flamingo legs". She comes home and her mom finds a magic wand that allows her to see what people are thinking. She takes it with her and she can see what everyone is really thinking and it’s not what they are saying. She went to school and saw that when the boy said, “Hi there flamingo legs” he really meant “when you are around everything looks pink". I know what a flamingo is, I’m so smart”. A funny example was when the alligator said “You have nice legs” but what he was thinking was “Nice tasty drum sticks:”

One lesson in this book is to say what you think. Also, what people say is not always what they think.

We liked this book because we thought it was cool that the magic wand was a bubble wand instead of a normal wand and it showed what people were thinking in an actual bubble.

We (Sebastian and Hudson) didn’t like the book because sometimes people say something and mean something else for a reason. Like if you have a crush on someone and you don’t want to tell them. Also, it’s not a very good thing to see other people’s idea or thoughts.

We recommend this book to kids in grades k-2. Also, we recommend it to people who have trouble standing up for themselves. It would help people understand that people may not mean what they are saying and so they might not get sad about it.

Ryan A., Sebastian E., Jack P. and Hudson B.
are students in
Westport Book Club