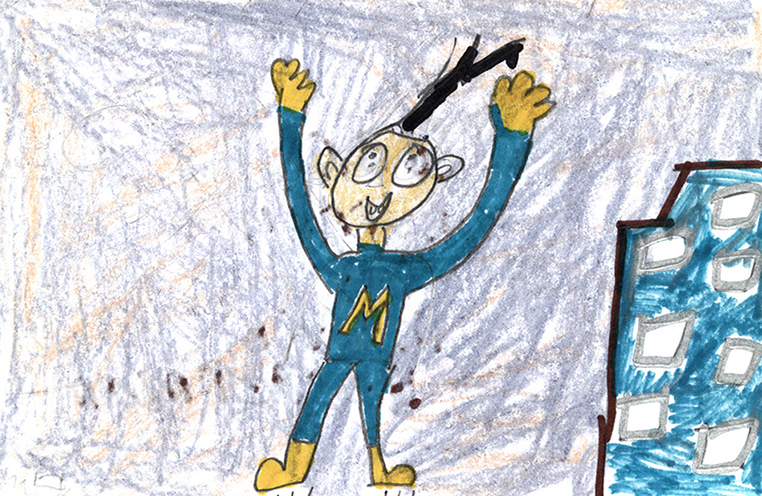 Melvin Beederman Superhero and the Curse of the Bologna Sandwich by Greg Trine and illustrated by Rhode Montijo is about a superhero that you wouldn’t think of when you think of a superhero. In the beginning Melvin doesn’t feel like a real superhero even though he graduated at the top of his class. His headmaster sent him to Los Angeles to be a superhero. When he got there, he set up his hideout. Even though Melvin couldn’t get up in the air on the first try he went to go stop crime. After stopping bad guy after bad guy he heard a mom yelling “help!” then Melvin saw a baby about to get crushed! So Melvin flew to the mud and saved the baby! After that his cape was dirty so he went to the dry cleaners to clean his cape. Melvin came back 3 days later and couldn’t use his powers. While he was walking home he saw a girl flying. Melvin caught up with the girl and said “that’s my cape”. And that’s when Melvin found his cape and a new sidekick. Once they were teammates they went off to stop the McNasty brothers. Melvin knew the awful smell of the McNasty’s so he could follow it. Finally he got into the building and they both started kicking down doors to find the McNasty’s. All the sudden Melvin heard “help…me…get…out...of…here”. It was Candace. Melvin went to the room where Candace and the McNastys. Candace was tied up. Then the McNastys grabbed Melvin and tied him up too with a bologna sandwich in front. Bologna is Melvin’s and Candace’s weakness. Melvin and his partner Candace grew weaker by the second. Read the book to find out if Melvin and his sidekick get out and put the McNasty’s back in jail. That’s why you should read this book.

Melvin Beederman is a great book that teaches you if you have super powers, you should use them for good. One reason I think that is because at school Candace uses her super powers to stop the bullies from being mean to other kids. My second reason is that Melvin took pride and saved a baby by flying full speed to stop him from getting smashed by a monster truck. The last reason I think that you should use super powers for good is that on page 94 Candace and Melvin are flying together to try and stop the McNasty Brothers. My favorite part is when Melvin and Candace stop the train with the McNasty’s in it. I like this part because at first Melvin couldn’t stop a train and that shows that Melvin and Candace combined are very strong. My favorite illustration is when Candace is doing track and doing really well. She was doing really well because she had Melvin’s cape. The picture shows Candace is flying with Melvin’s cape and she looks happy. Her schoolmates are on the ground running after her with surprised faces. I think Melvin Beederman Curse of the Bologna Sandwich is a great book and it teaches people to not give up. Melvin has trouble flying but he doesn’t give up until he gets in the air. It also teaches people to not doubt themselves. That’s why I give the book 5 out of 5 stars.