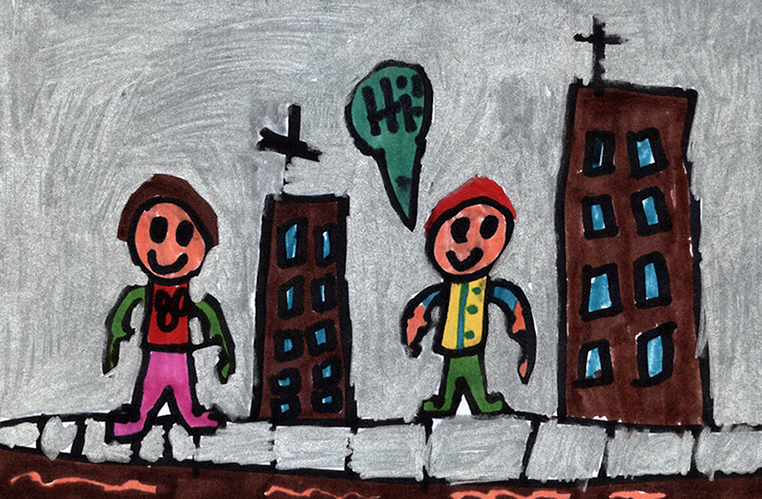 If you like books of friendship, then read Marvin Redpost Flying Birthday Cake by Louis Sachar. In the beginning, a boy named Joe Normal comes to Marvin’s school. The class is learning about mammals. Mrs. North asks,” Who can name a mammal?” All the other students named mammals, but when it was Joe’s turn he couldn’t remember the name, but described it instead. “It’s fat and has a long nose…” Nick said, “Is it an elephant?” The class is already wondering why he can’t remember that. At recess, Nick beat Stuart and Marvin at wall ball. Then it was Joe’s turn and he beat Nick! “I hate Joe!” said Nick. After school he goes to Marvin’s house and Joe teaches him a new game called wizzle fish. Wizzle fish is a game that involves paper plates. You need 3 people or more to play. There are a few sharks and everybody else needs two paper plates. You can only walk on the paper plates that you put on the ground. If you slip or touch the ground, you have to stay there and then the shark comes to eat you.Both Marvin and his whole family liked playing wizzle fish. So Marvin brings a few paper plates to school and Stuart and Nick come see what’s going on. Marvin tells them it’s a game called wizzle fish that Joe had taught him. At recess everybody learned how to play it and loved it. Read the book to find out if this game helps everyone learn that Joe is a cool guy.

Marvin Redpost is a perfect book for people who like books about friendship. My favorite person in the book is Joe. He walks away when someone is bullying him. For example Nick gave him a hard time at the beginning of school when they were learning about mammals. I don’t like Gina and Heather because they are bullying Joe and call him “doorkey.” It’s not nice and they shouldn’t bully him. I especially like the part when Joe came over to Marvin’s house and met Marvin’s brother and sister because he makes new friends and they all really like him. For example Marvin’s sister said, “I like Joe. He’s not like Nick and Stuart. They’re weird.” My favorite illustration is when everyone is playing wizzle fish with Joe. They are all happy. Some are on the ground, some are trying to get people and others are stepping on the “wizzles” or plates. It’s a great picture because everyone is playing with Joe and people are having fun. That’s why I think this book is a good book about friendship.

Marvin Redpost Flying Birthday Cake is a perfect book for second and third graders. It’s a great book and easy to read. I think this book will teach kids about not to bully others just because they are different from you.