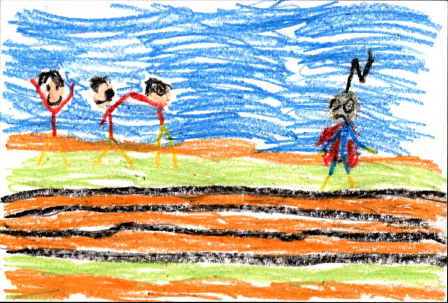 Have you ever been in a life-threatening situation where two “all around bad guys” trap you in a building that is going to be demolished in a couple of weeks with your weakness, a fatal lunch meat? You probably haven’t had that experience, so you can read Melvin Beederman, The Curse of the Bologna Sandwich, where a superhero named Melvin finds an apprentice and the McNasty Brothers break out of jail and Melvin tracks them and then Melvin kicks down a window and finds… Well, I should let you read the book but I’m going to spoil it anyway… nothing!

My opinion on The Curse of the Bologna Sandwich is a good one even though it is a bit dry when it comes to details and plot. My favorite part is when Candace hugs “a guy named Fred”. Fred appears at the most awkward places, so naturally he’s my favorite character. Even though Melvin and Candace have super powers, and they save people, and I should be in awe of them, and yet still, Melvin loves math, but I still like Fred. Additionally I like the drawing style, with some details but not to much. It is also very cartoony, which is a style I like.