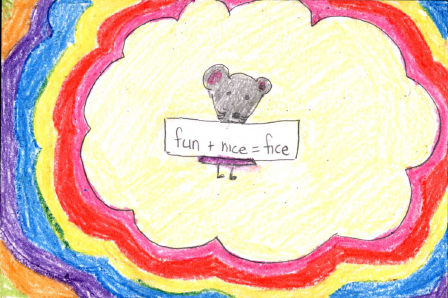 I enjoyed this book for its characters such as my favorite character Gert. My favorite part of the book is when Gert makes her fun word combinations for example fice. A fice person is fun and nice like Sir Sidney a loyal friendly boss, nothing like Barnabas Brambles he’s bean=bad and mean. Additionally the illustrator M.Sarah Klise did a spectacular job because just by the illustrations you knew what was going on in the text. Also I enjoy the black and white photos when I see them I feel like they came off a sketch pad. However, the unique part is the characters in the book for example Elsa she's fun and super clumsy that's why she always…. sorry can’t tell you. Finally, while I read this book I felt like I was in it what I mean by that was the book hooked me in and I could picture everything going on. To sum up this book has a pool of imagination and creativity that is what I L-O-V-E about this book.

I recommend this book to kids that are in the ages 5-9 for its funny conversations and whimsical characters such as Elsa, Leo, Gert, Bert, Dan Banana, and Stan Banana. Also Barnabas Brambles he's bean=bad and mean. To sum up I think everyone should read this book.