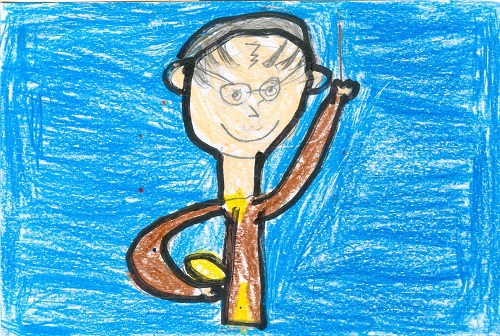 This book is about a boy who is famous. Harry Potter is half way through training as a wizard at his school call Hogwarts. A special event is taking place that has not happened in over a hundred years called the Tri-Wizard Tournament. Going along with the tournament, there is an unusual goblet called The Goblet of Fire. Do you want to know more about the goblet, the tournament and Harry? Then you should read this fantastic book. The genre of this book is Fantasy because it involves magic.

I liked this book because it showed bravery, generosity and kindness. The book showed bravery when Harry faces the Dark Lord Voldemort and does three really dangerous tasks. It also shows generosity when Cedric broke a rule and told Harry a way to find a clue for the second task. Harry acts kind when he gives his prize money to Fred and George. There was one character who I found interesting and weird. That character is Mad-Eye Moody.

I recommend that ages 9 and up should read this book, but not younger kids because it might be a little challenging for them. This book has 734 pages which is a plethora of pages! Somebody who likes fantasy and magic will love this book. This is why you should read The Goblet of Fire.