Arthur and the Cootie Catcher

Arthur and the Cootie Catcher 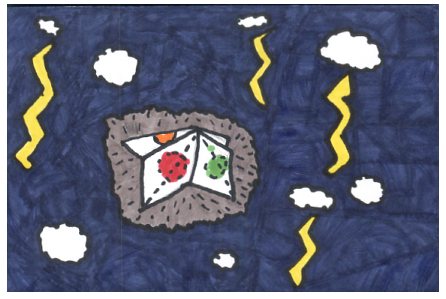 Arthur is 8 years old and in the third grade. He has a younger sister named D.W. Arthur and his friends Francine, the Brain, Binky, Buster and Sue Ellen are at Prunella’s house for her half-birthday party. Her sister Rubella reveals something called the fortune-teller’s cootie-catcher. She tells them that it would change their lives forever. Then the kids start trying it out and the fortune-teller’s predictions start to come true. For example, the fortune-teller predicts that Buster would get an A on his geography test and he does. The Brain tells Arthur not to listen to the fortune-teller but Arthur wants to listen to it because if you don’t you will be cursed. When the Brain does not listen to the cootie-catcher, he gets cursed and his bike gets run over by a truck. After that, nobody in his right mind would disobey the cootie-catcher. But, after a while, Arthur and his friends are getting tired of the cootie-catcher telling them what they should do, so they want to throw it away, but they were too scared of getting cursed. So they decided to….Well, you just have to read the book to find out!

I love this book in so many ways because it is so good. I love all of the illustrations because they are funny. For example, in the picture when Buster gives Prunella a half-eaten chocolate bar, she looks scared. There are also a lot of funny parts in the book. That’s also why it’s good. For example, when Buster says, “I don’t even get ‘A’s in my alphabet soup” when he and his friends were talking about if Buster was going to get an ‘A’ on his geography test. I like this book because the characters are nice. They don’t yell at each other even when they don’t agree.

I would recommend this book to kids in grades 1 through 3 who like mysteries. The book is not too long and not too short, it’s perfect. Also, if you like animals who act like humans, this book is great for you.