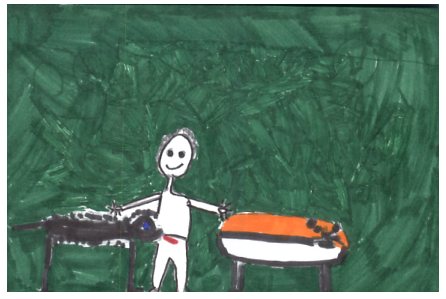 Humphrey is a hamster and a class pet in Room 26 in Longfellow School. Every Friday Humphrey gets to go with a classmate to his or her house. This time, Humphrey is taken home by Richie. Richie is doing an experiment for school. Humphrey is worried because he had heard that Richie was going to turn him into a monster. Richie tells Humphrey about the experiment. The experiment is how many times Humphrey can spin on his wheel in three minutes. On Saturday, Richie’s Uncle Aldo comes and helps with the experiment but there is a problem. Richie needs to count how many times Humphrey can spin his wheel. The problem is that Humphrey goes too fast and it’s hard for Richie to keep count, so Richie and Uncle Aldo attach a bell to the experiment so Richie can make a mark on paper each time the bell rings. Then, Uncle Aldo leaves and Richie finishes the experiment the next day. That night, the family goes out to a restaurant and while they are gone, Poppy, Richie’s dog breaks the experiment. When Richie comes home, he goes into his room and he is shocked to see that someone has destroyed the experiment. Richie is worried because tomorrow is school and the project is due. Before dawn, Humphrey figures out how to fix the experiment. Will Humphrey be able to fix the experiment before school? You should read the book to find out!

I like this book in a few ways. I like Humphrey because he is cute, smart, curious, and funny. My favorite part was when Richie had to go to breakfast and Humphrey is left to fix the experiment and at the same time try to keep Poppy away. I liked it because it’s only five minutes before school and Humphrey has two problems. I also really liked the illustrations because they made it easier to find out what the characters looked like or what is going on in the story. For example, when Humphrey was using a ruler to keep Poppy away from the experiment, I don’t think I would have known what it looked like.

I recommend this book to kids who are ages 6 to 10 who likes hamsters. I think you should read this book because it is exciting and funny. If you read a different book from this series, I think you will like this book the best! I hope you read Humphrey’s Playful Puppy Problem and enjoy it!