Melvin Beederman Superhero the Revenge of the McNasty Brothers

Melvin Beederman Superhero the Revenge of the McNasty Brothers 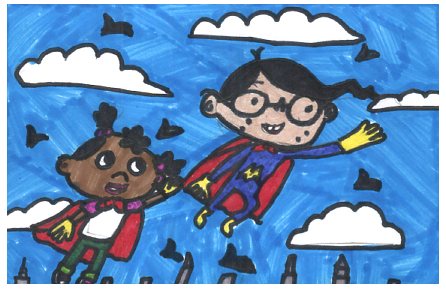 This book is about a superhero who lives in L.A. Melvin has x-ray vision and can see people’s underwear. While Melvin is making friends with a rat who Melvin named Hugo, the McNasty Brothers, Grunge and Filthy McNasty, are thinking how badly they want to get revenge on superhero Melvin for sending them to jail. The McNasty Sisters, Puke and Mudball, come to free their brothers from jail. The McNasty Brothers and Sisters trap Melvin and Candace , Melvin’s assistant, in the Acme Bologna Company warehouse with 6,000 pounds of bologna. Bologna is Melvin’s and Candace’s weakness. When the McNastys leave, Grunge leaves a bomb close to where Melvin and Candace are tied to a pole. “Can’t… move… get…me…out…of…here,” Melvin and Candace gasp. Do you think Melvin and Candace will find a way out of the warehouse before the bomb goes off? You have to read the book to find out!

I like this book because it is very interesting. I like the illustrations because the author doesn’t really tell the emotions and feelings. When I see the illustrations I get a much better idea of the characters’ feelings. Here is an example. When a lot of bullies jump on Candace, you can tell from her face that she is angry even though the author didn’t mention it. My favorite part in the story is when Hugo talks to Melvin, because Melvin always comes up with two ideas of what Hugo might be saying when he squeaks. Here is an example. Hugo says, “Squeak!” Melvin wasn’t sure but he thought he’d just said, “Another episode of The Adventures of Thunderman?” or possibly, “Do you have a girlfriend?” I also like this because it happens more than once in the story. I like the characters because they are both realistic and unrealistic. For example, the realistic Melvin and Candace go do math together at the library. When they’re unrealistic they’re saving people, solving mysteries, or they’re flying over the city of Los Angeles, California.