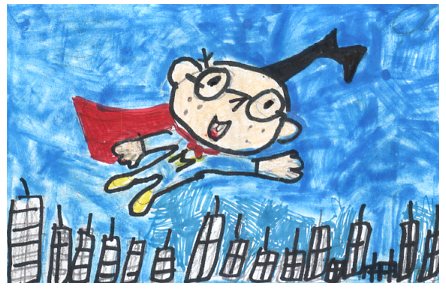 Do you like bologna? Well, it’s this superhero’s weakness! In the beginning, Melvin Beederman has graduated from Superhero Academy. Melvin is a superhero, but like all superheroes, he has weaknesses. His weaknesses are bologna and it takes him five times to get off the ground before flying. One of Melvin’s superpowers is x-ray vision, but he doesn’t like it when he sees people’s underwear. Melvin has to go to L.A. because they need a superhero. He finds a tree house to live in. He fixes it up, and turns it into the perfect home. Then he watches some TV. Next, Melvin stops a crime, and then everyone knows he is the new superhero. Then he saves a baby from being run over by a tractor, but he gets his cape all muddy. So, he goes to the cleaners. Then Milo the Wonder Tailor says the cape will not be ready for 3 days. Melvin’s cape is cleaned but it shrunk. He tries using his powers, but none of them work. The McNasty Brothers, two villains, break out of jail. Meanwhile, a kid named Candace Brinkwater gets the lead in the Little Red Riding Hood school play. When Candace is at home getting ready for the play, she realizes her cape is too long. When she is at the play, she sees everyone’s underwear but she doesn’t know why. Candace decides to wear her cape to school. She notices that she is gaining speed and getting stronger. She hears about the McNasty Brothers and decides to stop them. Candace and Melvin show up at a crime, and Melvin realizes that Candace has his cape. But Candace misses being a superhero, so Melvin duplicates his cape so Candace can still have superpowers. Candace and Melvin decide to become partners and try to stop the McNasty Brothers. They split up to find the McNastys. When Melvin finds them, he sees Candace tied up, but next to her is a bologna sandwich, so Melvin cannot help Candace. Melvin falls down and says, “Can’t…move…get…me…out…of…here.” Will Melvin and Candace escape? Will they get the McNasty Brothers? Read the book to find out!

I like the illustrations in this book because they tell the story better. For example, the illustration of Melvin in Superhero Academy shows Melvin on the floor gasping because his friend has bologna in his hand. I like the author’s style because he puts the narrator in the story and says the narrator is on coffee break. I really liked how Melvin always falls five times before flying! It is so funny!

I recommend this book to kids who like funny jokes and funny characters. I recommend it to kids who are in second and third grade. I also think that kids who like superhero stories will like this book. I hope you read and enjoy Melvin Beederman The Curse of the Bologna Sandwich, too!