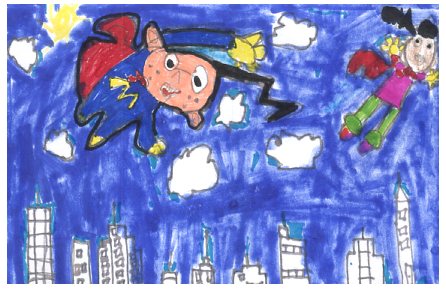 Melvin Beederman is a superhero. His cape gives him powers. Melvin can see through people’s clothes with his x-ray vision. He doesn’t want to see people’s underwear, but he can’t turn off his x-ray vision. Melvin’s weakness is bologna. Melvin says, “Can’t…move…get…me…out…of…here” when he is near it. Melvin lives in a treehouse in L.A. He loves to drink root beer and eat pretzels and watch The Adventures of Thunderman. Melvin’s cape gets switched with someone named Candace Brinkwater. Candace gets powers and doesn’t know why. In kickball, she kicks the ball over the fence and she gets 500 points in basketball. Candace decides to start saving people and one day, she finds Melvin trying to stop a purse-snatcher. Melvin and Candace realize that their capes got switched. So, Milo the Wonder Tailor, splits Melvin’s cape in half and gives Candace half of the cape. Melvin and Candace became partners in solving crimes. They split up to find bad guys named the McNasty Brothers. Melvin finds Candace tied up on a pole with a bologna sandwich. Melvin falls to his knees and is losing his powers. Will Melvin and Candace escape? Will they catch the McNasty Brothers? You’ll have to read the book to find out!

I think the illustrations are really cool because they give a lot of details. For example, when Candace is saving everyone from a house falling in a play, I can see from the illustration that she is nervous. I also like the illustration where the McNasty Brothers are counting their loot because Grunge is making a silly face. I think the book is really funny. For example, the bad guys’ names are Filthy and Grunge McNasty and the superheroes’ weaknesses are ping pong balls, jelly donuts, and bologna. My favorite part is when Melvin tries to take off. It always takes him five times to get off the ground!

I recommend this book to boys and girls in grades 2 to 5 who like superheroes. I read all of the books in the Melvin Beederman series and this is one of my favorites. I hope you will read and enjoy it, too!