EllRay Jakes is Not a Chicken

EllRay Jakes is Not a Chicken 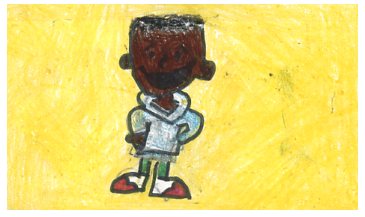 In EllRay Jakes is NOT a Chicken, EllRay’s classmate Jared is teasing him. In the beginning, EllRay gets into a war with only three people: himself vs. Jared, the meanest kid in the class, and his best friend Stanley Washington. EllRay doesn’t even know why this war started. Jared and Stanley play keep away with EllRay’s lunch, grind his knuckles, and trip him when nobody is looking. In the middle, EllRay’s dad says that if he doesn’t hear that EllRay got in trouble for the whole week, then they can go to Disneyland. EllRay tries really hard. He has a few accidents along the way including Jared spilling dirt over EllRay’s shirt and EllRay’s lunch getting soggy. In the end, Jared gets mad at EllRay and tells him to meet him in the park for a fight. Stanley comes too and brings a surprise: kids from their class! They watch as EllRay and Jared fight. Read to find out if EllRay goes to Disneyland.

EllRay Jakes is NOT a Chicken is a great book! This teaches a valuable lesson about never giving up. EllRay never gave up when he tried to be good for a whole week, even when Jared teased him. In the story, Jared calls EllRay a chicken when he spills milk on EllRay’s lunch and he doesn’t do anything. I think EllRay’s little sister Alfie is very funny. When she and EllRay are talking about who is the boss in the family, Alfie thinks that their mom is the boss because whenever they go to Target their dad always says to the mom, “You’re the boss.”

I would recommend this book to kids who like funny books. One reason is because EllRay says a lot of funny things. One example is that he said that his arm muscles look like ping-pong balls! So if you are looking for a funny book to read, get this book at your local book store or library!