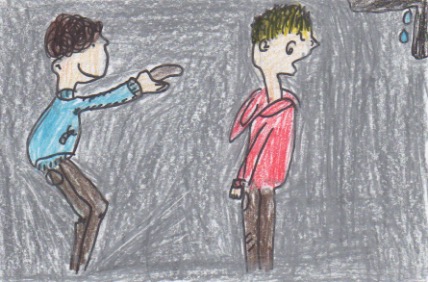 Horrible Harry is a kid who goes to a school called South School. Sometimes he gets in trouble. For example, he holds up a fist at a kid named Sidney. On a field trip they go to a mine and one of the characters’ name is Doug. Doug gets kind of scared. Harry does a prank on Sidney. What prank does Harry do on Sidney? If you want to find out, read the story. After they get back, Doug kisses the grass because the mine was wet and dirty. He was so happy to be home!

I think this book is funny because Harry pulls a prank on Sidney. I liked when Harry did that because Sidney made an annoyed face. My favorite characters are Harry and Doug because they’re both funny. I liked the illustrations because they show what Suzy Klein, the author, writes in the words. When Harry does the prank on Sidney, it reminds me of when I do pranks on my brother. It’s different from other books I read because the illustrations are different. The sketches are black and white and they look realistic. I wonder what will happen in fourth grade.

Amanda B.
is a student in
Pam's and Elissa's 2nd Grade Class