Franklin Goes to the Hospital

Franklin Goes to the Hospital 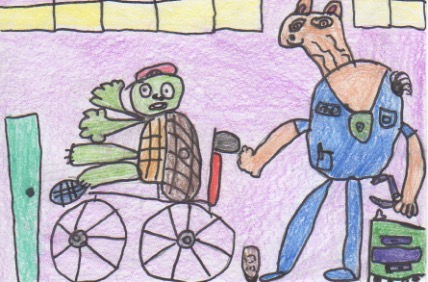 This book is about how Franklin goes to the hospital. When Franklin was playing soccer, his teammate passed the ball to him. The ball bounced off of Franklin. After Franklin’s bath that night, Franklin felt an ache in his shell. Franklin’s mom said, “We could go to the doctor’s.” The next morning, Franklin and his mom went to the doctor’s. The doctor discovered a little crack in Franklin’s shell. The doctor said, “Franklin, you need to get an operation.” Franklin wondered, “What is an operation?” The next morning, Franklin sat with his friends and he had his book from the doctor. In a little while, Franklin drove with his parents to the hospital. Franklin arrived at the hospital. He got a bracelet. He got pushed in a wheel chair to his room. See what happens to Franklin next.

I think this book shows courage when Franklin acts brave by going into the hospital and not running away when he needed an operation. This made his operation feel quick. I liked this book because it tells you to try new experiences when you are devastated. My favorite part is when Franklin gets his x-ray pictures. I think this illustrator made great pictures because she made them realistic. I like the characters Snail, Beaver, Bear, and Fox. They show caring for Franklin. This story reminded me of when I got a concussion. I went to the hospital just like Franklin. This book also reminds me of other books where characters unfortunately have to go to the hospital for a number of reasons. This book makes me wonder if I were Franklin would I be scared. This book is special because it tells you everything is going to be just fine, even if it’s going to be scary.

I recommend this book to kids in the hospital because they might have an experience similar to Franklin’s. I think shy people would like this book because it tells you not to worry in scary situations. I also think young artists would enjoy the drawings because it would inspire them. If you haven’t had a chance to read the Franklin series, start off with this book. If you like caring characters, read about the caring characters such as Franklin’s friends. So start off with reading Franklin Goes to the Hospital!

Sadie G.
is a student in
Pam's and Elissa's 2nd Grade Class