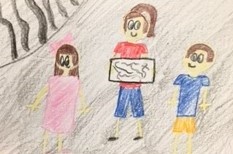 Since Kyle Keeley loves games in any form, he tries to organize a group to escape the library but he has a problem with one of the other kids locked in the library. This problem kid is Charles, who wants to always be in charge and not be a good team player. Charles makes his own team with two other players. Since Charles’ family never loses he doesn’t like it when the clues start getting harder. When Kyle and his team get a lot of information, they seem to be the ones to win. At one point Charles gets angry and tells his team that he wants to try to convince Kyle to get out of the library the wrong way and cause them to lose. Kyle doesn't fall for it so Charles starts a fight; you will have to read the book to find out who wins, who fights and what clues lead to escaping from the library!

I loved the book, “Escape from Mr. Lemoncello’s Library” because it was so interesting that I read it in only one week. The book opened my mind by telling me all the details. The details are so specific that I know what the character is doing and how they are doing it. I loved it, and other people might too! My favorite character was Mr. Lemoncello, because he wears interesting combinations of clothes. He is one of those people who acts wacky and theatrical. I liked the part when Mr. Lemoncello appeared on a T.V. screen to talk to all of the kids that were in the library; it was funny because his clothes were really different and not like typical teacher clothes. One example was his shoes; every time he walked, his shoes made a squeaky noise. That made me laugh. I’d love to have shoes that squeaked when I walked.

This book would probably be best for kids in third, fourth and fifth grade because of the puzzles and problem solving. If someone likes adventures and enjoys reading, it would be a great way to spend every afternoon reading “Escape from Mr. Lemoncello’s Library”.