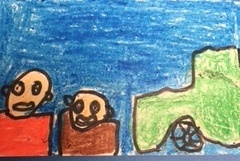 What would you do if someone in your family was kidnapped and presumed dead? Tony’s sister, Molly, was kidnapped and all of the evidence pointed to her death, but was she alive or dead? Two or three months after Molly disappeared, Tony noticed an interesting fact that was revealed on a home video. This observation leads him on the adventure of his life. If you want to find out what is next you will just have to read it.

A boy named Tony always had a suspicion about the kidnapping of his little sister, Molly. One day he and his friend Pat were watching a home video when they noticed someone talking to his sister and then they started thinking that she was still alive. Tony and Pat put themselves in danger by doing something very unsafe. They found out something interesting. they took that clue, which led to another clue and that led to a detail which exposed the truth about his sister. The two of them run-away and in the end they learn to trust their instincts and never give up.

I like this book because it’s a mystery and full of suspense. There are always turns and twists in mysteries that makes the reader think and solve problems while reading more and more. My favorite character is Pat because he is so funny at times but sometimes he is clueless and thinks he knows it all, but he doesn’t. Pat helps Tony make difficult decisions, such as taking dangerous risks. The book made me laugh but it also can be a little scary depending on your opinion of what is scary. My favorite part is that Tony and his friend Pat start to do something that is very unsafe, but in my opinion, that it is the best part of the whole book. If you read it this book can be your best part too. I have a connection to this book because I have heard stories about kidnappings in the news. It reminds me of a movie about kidnappings, “Taken.” I did like the author’s style of writing. The author makes it sound like someone in his family was kidnapped and he is makes the story suspenseful.

I recommend this book because it has adventures that boys and girls will like. The grade for reading this is 5,6 and 7 grade. I think that even adults who like mysteries would like this book. It is one of the best mystery books I have ever read. And I think many readers would like it too.