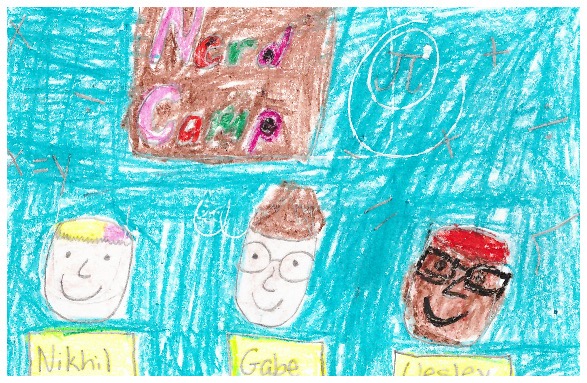 ‘’I can’t tell Zack this!’’ Join Gabe, Nikhil and Wesley in their summer center for gifted enrichment in the story Nerd Camp by Elissa Brent Weissman.

To begin with, Gabe was getting fit for a wedding when his birth mom called and said he got in to the enrichment camp. The camp is called S.C.G.E. which stands for Smart Camp for Geeks and Eggheads. Then Gabe’s soon to be brother was jealous that he got to go to summer camp but he didn’t know that it was a summer center for gifted enrichment. He thought that people who thought school was fun were nerds. Once Gabe got there he got settled in, and that is when he met Nikhil and Wesley. They become his best friends in all of their camp adventures as Gabe realizes that it’s ok to be smart.

My favorite part was when the color war broke out. There were teams that were colors and they all were facing against each other. I like this part because everyone thought it was the police because of all the bright lights. I felt amused while reading this book because of all of the funny parts. One part that was really funny was when a girl named Amanda said that Gabe was following her, but she was really following him! My favorite character was Gabe. He’s my favorite because he is mean to Amanda because she was annoying!

In conclusion, I recommend this book for ages 9-12. It is not the easiest book to read because it was really long, but it was good. I think both boys and girls would like this. This is the only book in the series, and has no pictures. It was fun to visualize the story, instead of seeing pictures.