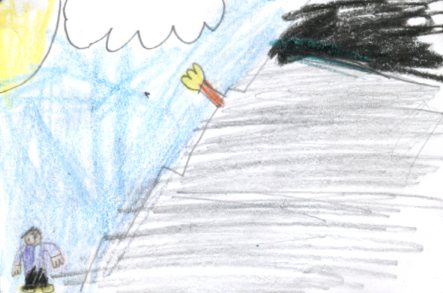 Have you ever run away from your house? The book Wild Kid by Harry Mazer is about a kid named Sammy who runs away from his home, and gets lost in the woods. In the beginning, Sammy gets a timeout because he cursed his mother’s boyfriend named Carl. Next, Sammy gets something to eat at the grocery store because he was outside, but when he comes out his bike isn’t there. Finally, Sammy sees his bike but there is a guy on it so Sammy follows the guy in to the woods but Sammy gets lost. Sammy meets a kid named Kevin and even though he isn’t nice to Sammy they become friends. You’re going to have to read the book to find out if Sammy finds his way home.

In my opinion, the book Wild Kid by Harry Mazer is an awesome book! For example the main character Sammy is very adventurous because he climbed a cliff and got stuck at the top without being really scared. This book is also very good because it makes you feel like you’re there when the helicopter arrives because it sounds like a helicopter in your head. This book is funny when Sammy jumps in a fruit truck. As you can see, if you’re ready for adventures I would read this book.

A.R.
is a student in
Mrs. Miro's 3rd Grade Class