Danny and the Dinosaur

Danny and the Dinosaur 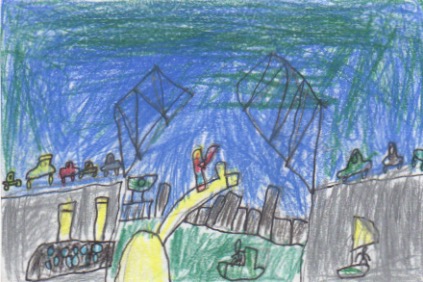 Don’t you remember learning in school that dinosaurs are extinct? Guess what?! I know a boy named Danny who has a friend as a dinosaur! A boy named Danny went to a museum. Danny saw Eastern Woodland Indians and bears. He saw tools and weapons. He saw dinosaurs. Then he saw a REAL dinosaur! He had so much fun! Find out what fun he had and everything they did together. Did they get ice cream? Did they go to the zoo? Did they go to the baseball stadium? You just have to find out.

This book was great because there were a lot of details and comedy. I loved the part when Danny used the dinosaur as a boat because it was funny. Think about all the fun they had. They went to the zoo and saw the baseball game. They got ice cream and made a bridge and played hide and seek with other kids. They ran around the neighborhood. That’s why this book was great. That’s my opinion.

Max M.
is a student in
Pam and Carly's Class