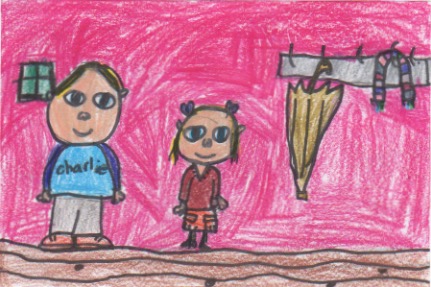 Say Cheese is a very funny book about Lola having picture day and she says she won’t get dirty. Lola’s friend Lotta tells her what things can get you dirty and what can’t. For example, Lotta says, “Lola, water makes you clean.” and “Lola, mud makes you dirty.” and “Lola, paint makes pictures neat and nice.” Lotta also says, “Reading gets you smart AND it’s very tidy too.” Lotta says, “Lola, we should clean up our messy hands in the water tray.” Lotta does not get dirty. I hope Lola does not either! Lola has fun with Lotta all of the time! Lola jumps in puddles. She plays in the water tray and she drinks pink milk. To find out what happened to Lola and her pink milk, you should PROBABLY read this book.

Say Cheese is one of the greatest books I’ve ever read. It’s hilarious! My favorite part was when Lola was making very funny faces when her picture was being taken. My favorite characters were Lola and Charlie because Lola says to Charlie, “Mom said it is going to be an EXTREMELY special photograph. Especially if I stay all tidy and clean.” And Charlie responded with, “And how easy do you think THAT will be?” I felt like the book was taking me on an adventure. On a scale of 1 – 10, I would give it a 10 because it is very funny. The story reminds me of my life when I wake up in the morning and me and my little sister, Ella, take a picture and I have bedhead. It makes me wonder why Lola played in all of the things she did. For example, she played in the water tray. It makes me wonder why she listened to Lotta, her friend. I would like to change the part when Lola reads a book. Instead, I would like Lola to play freeze dance because I really like freeze dance a LOT! I like the author, Lauren Child’s, drawing style because it inspires me and makes me want to draw as well as she does.

I know you’re going to really like the book. It’s a comedy for all ages. I recommend this book to people who like to get dirty and like to take pictures. I think this book is for kindergarteners up to 11th grade and even parents. I really like the book because I like to take pictures and I like to get dirty like Lola too! I think if you like books by Lauren Child, you might like this book. I really like the book because it is interesting to read by myself and to my family. I would also recommend this book to people who really like to laugh and smile and really like to read as well. It’s hilarious to me for many reasons. Some examples are when Lola says, “Easy peasy, lemon squeezy!” and Charlie says to Lola, “Yep, you’re a great smiler. What do you say for a big S.M.I.L.E.?” Lola says, “Cheese, cheese, CHEESE!!!” I like the book and I know you will too! I really think it is amazing for ANYBODY who likes to use their imagination and anybody who thinks they are capable and believes in themselves! I really like the character Lola because she is a funny person and she is also one of the main characters in the whole book and series. My mind was wild with happiness! The book taught me a lesson. “Even if you’re dirty, you’re always yourself.”

Ava S.
is a student in
Pam and Carly's Class