Stink and the Incredible Super-Galactic Jawbreaker

Stink and the Incredible Super-Galactic Jawbreaker 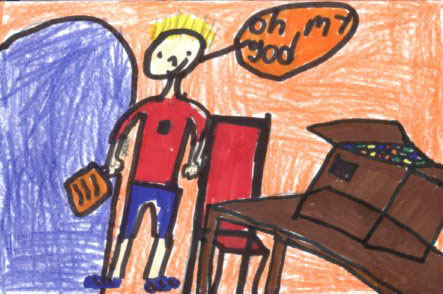 Have you ever wanted free stuff? Well, Stink and the Super Galactic Jawbreaker by Megan McDonald might be the book for you. In the beginning, Stink is at a candy store with his sister Judy. Stink gets a giant jawbreaker which he spends two weeks or so sucking on. After he finishes it, he writes a letter to the company that makes the jawbreakers. He says that the jawbreaker he bought didn’t break his jaw. A week later or so a box comes that is for him. The box contains 21,280 jawbreakers of all different colors and sizes. If you want to find out what company Stink writes to next and what other free stuff he gets, you will have to read the book.

I liked the book because the characters were very funny. My favorite part was when Stink becomes very angry and mad because he finishes the jawbreaker that did not break his jaw. He goes stomping up the stairs and moping around the house. A second character is his sister Judy. She is usually taunting Stink. In the Stink series, Judy and Stink have a love/hate relationship. In this book Judy bothers Stink with comments like, “Somebody woke up on the wrong side of bed.” and “Your teeth will fall out.”

I recommend this book to 2nd grade through 5th grade because by then you might be reading more advanced books. If you would like a laugh, you would enjoy this book because most of the parts are very funny. I would give this book a five out of five star review because it was just a really good book and all the events were really funny. It was also well written. So, if you have ever wanted free stuff Stink and the Super Galactic Jawbreaker might be for you.