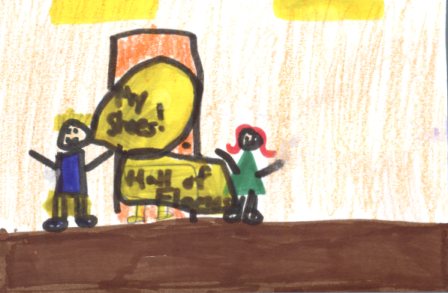 Do you like things that make you laugh? If you do, read Stink and the World’s Worst Super-Stinky Sneakers by Megan McDonald. Once, Stink’s gym teacher’s wife takes Stink and his classmates to the Gross-Me-Out exhibit at the science museum. There are Musical Farts, a Vomit Machine and a Burp -O-Meter. There is a small area and Stink smells the whole thing. Stink smells a gigantic nose with a bottle coming out of it and when Stink smells it, he fake faints. When Stink gets up, his friends Webster and Sophie of the Elves asks what it smells like. Stink says it smells like feet. Then at lunch time Mrs. D hands out flyers for the world’s worst stinky sneaker contest. Stink has really smelly shoes and so does Sophie of the Elves. They both enter the contest. Stink is sure he is going to win. One day, Stink puts his shoes in the hallway and puts a sign that says, “Beware the Hall of Flames”. Judy Moody, Stink’s sister, puts powder on Stink`s shoes and then they smell good. Stink is mad. So, Stink runs around while his sister Judy Moody chases him and there is more to the solution but I wouldn’t want to give it away.

I like Stink because he is brave, gross, and funny. For example, Stink is called “the nose” because Stink is the only one to smell the smell exhibit when no one else wants to. Another reason is when Stink puts his shoes outside his bedroom door and writes, “Beware the Hall of Flames”.

I give this book a 5 out of 5 rating because anyone would like Stink`s personality. Stink is hilarious and gives you a good laugh. Once, Stink gets to take a tour of the nose and he gets nose hairs all over himself. Also, the book has comic strip illustrations by Peter H. Reynolds to help you understand the text and the illustrations are really funny too. I know a lot of people would like this book.

Emma
is a student in
Mrs. Kayser's 3rd Grade Class