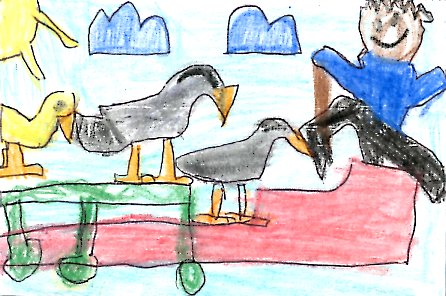 Edward is a young boy living with his family in Tennessee. They live during hard times and had no money. They love music. Edward and his father work in a grand hotel. One day Edward finds a lost baby duck and hides it from Mr. Schutt, the manager. He trains the duck every day to march to Philip Sousa's band music. Mr Schutt discovers the duck and challenges Edward. Edward wins the manager's heart by a putting on a grand duck performance. Edward becomes Duckmaster and wears a shiny uniform with brass buttons.

My favorite part of the story is when Mr. Schutt rewards him with a splendid uniform with shiny brass buttons, a grand cap, and declares him an Official Duckmaster of the Peabody Hotel. My favorite character is Edward because he is a young boy who works hard for his dreams to come true. This story relates to my life because it reminds me of my cousins who live in Nashville, Tennessee and we visit them every year. There is a big hotel there called the "Grand Ole Opry" where geese and ducks and birds are in and around the hotel and fountains. This story has pictures that help show Edward hiding his duck in the hotel and later training the duck everyday to the music. I felt like I was at the hotel.

I think others should read this story because it shows how Edward is attached to his duck and his music. This book reminds us how to never stop dreaming about what you love.