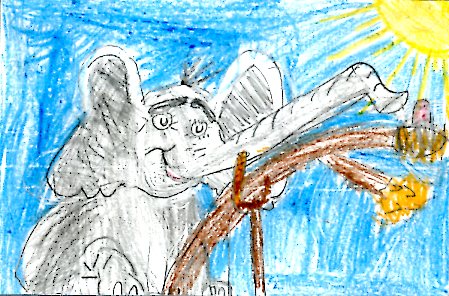 Mayzie, a lazy bird hatching an egg, was sitting there day after day wanting a vacation. Then Horton the Elephant passed by her tree. Horton told her to fly and rest. He sat and sat and sat during any kind of weather. Horton's friends teased him, but he continued to sit and say, "I said what I said and I said what I meant, an elephant's faithful 100 percent." Three hunters came sneaking up softly behind him and wanted to capture him and sell him to the circus. They sold him and the egg to the circus where they say Mayzie. Finally, the egg burst apart and out popped an elephant bird!

My favorite part of the story is when the elephant-bird popped out of the egg because we are learning about oviparous animals. . My favorite character is the elephant bird because it is unusual and not real. This story relates to my life because I've been to a circus before. The pictures help tell the story.

Other people should read this story because it is very entertaining and funny.