Judy Moody Was in a Mood. Not a Good Mood. A Bad Mood.

Judy Moody Was in a Mood. Not a Good Mood. A Bad Mood. 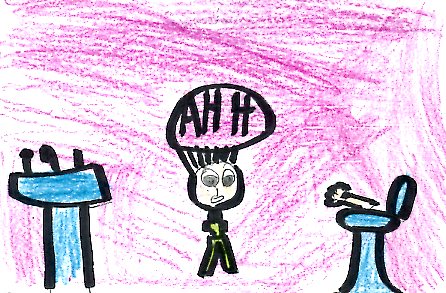 Judy Moody woke up in a bad mood because summer was over and she didn't go anywhere special. She was worried about school and sitting in the front row because she wanted to send notes to her friend Rocky. When she arrived in her 3rd grade room,her new teacher, Mr. Todd was greeting everyone. Their first project was a collage. After school she went to Vic's with her Rocky and brother, Stink. She accidentally broke his rock. Rocky and Judy wanted to buy a jawbreaker but they didn't have enough money.

Judy wanted to get a pet for her collage so her family went to the pet shop. They bought a Venus Flytrap and she named it Jaws. The next day it wouldn't open up to eat a bug. She took it to school for show and tell and it ate a bug. The whole class was amazed.

Later, Rocky and Judy went to Vic's and she bought a fake hand. They played a trick on Stink by putting the hand on a toilet seat. When he saw it, he screamed. They had so much fun they went out for ice cream.

I think others should read this story because it's an extraordinary book.