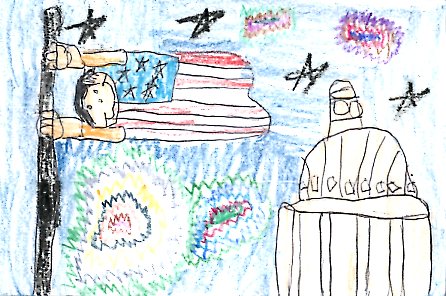 Flat Stanley takes a friend to Washington D.C. After he dresses up as the United State's flag in his town's Fourth of July parade, the President of the United States invites him and his family to Washington D.C. The President wants to meet Stanley and give him the National Medal of Achievement for being a hero. During his adventure, he sees the Declaration of Independence, the Lincoln Memorial, and the Washington Monument. Then, he makes it to the White House and meets the President. After talking to the President and listening to his brother's speech at the awards ceremony, Stanley learns what it means to be a hero.

My favorite part of the story is when Stanley is dressed as a flag because he looked cool and patriotic. My favorite character is Flat Stanley because he went to so many places during his adventure. This story relates to my life because it reminds me that everyone is different and that is what makes the world interesting. This story has lots of pictures that help show when Stanley got the National Medal of Achievement and when he was dressed as a flag.

I think others should read his story because it is a spectacular story to read and it shows us what it means to be a hero.