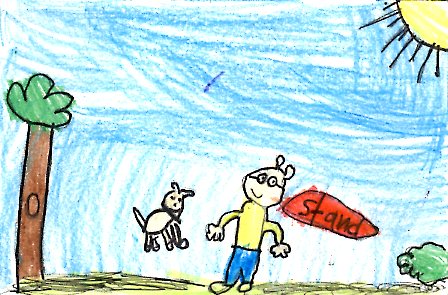 In the story Arthur's New Puppy by Marc Brown, Arthur gets a new puppy that he loves. He names him Pal. Arthur loves him very much, but the puppy keeps making a mess. Arthur gets so mad at Pal, he decides to train him. He trains him so well, Arthur decides to put on a dog show. Pal does great at the dog show and Arthur's parents tell him that he doesn't have to give Pal away or keep him in the garage.

Our favorite part of the story is when Pal does the show because then Arthur's parents say he can keep him. Our favorite character is Pal because he acts perfectly after he is trained. This story does not relate to our lives. The story has pictures and they help tell the story because they help us understand the story.

We think others should read this book because it is funny when Pal makes messes. It has an amazing and cool ending.